Ether is outperforming Bitcoin for a third consecutive day amid expectations that the intermittent bouts of optimism over the pending upgrade of the Ethereum blockchain will finally take root.

The native currency of the most commercially important blockchain gained as much as 2% to $1,716 as of 10:51 a.m. in New York. Bitcoin was little changed at about $21,693. Other tokens such as Solana and Cardano were trading on either side of unchanged.

Speculators have scooped up Ether call options with traders waging the token’s price could rise to around $2,200 in September in the past few weeks, while showing more interest in put options for downside protection after the upgrade. Known as the Merge, the Ethereum blockchain network is set to transition from proof of work consensus mechanism to proof of stake next month after a series of delays.

“We think the crypto-specific liquidations have largely concluded, and so price action is probably going to continue chopping violently with macro for the time being.” Cumberland, the crypto offshoot of the Chicago-based trading giant DRW, said in a Twitter thread on Thursday. “The benefit of this volatility is that it has likely shaken out the ‘Merge frontrunners’.”

That said, we think the crypto-specific liquidations have largely concluded, and so price action is probably going to continue chopping violently with macro for the time being. The benefit of this volatility is that it has likely shaken out the “Merge frontrunners.”

Investors anticipate the software upgrade can boost the token’s price since the new mechanism replaces a process, in which crypto miners use energy-intensive computers to secure the network and earn tens of millions of dollars in the token as rewards. That reduces its carbon footprint by 99%. The new mechanism also helps slow the rate of issuance for new tokens by eliminating the miners. 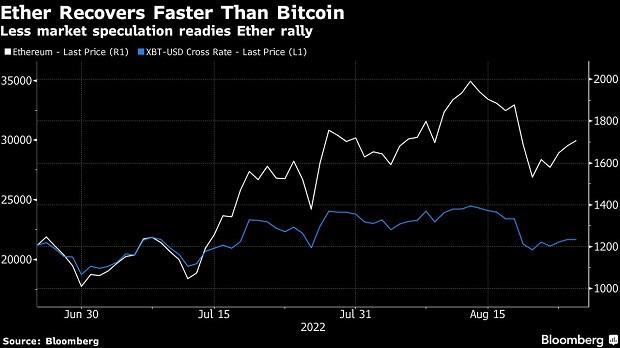 “The Merge (if completed successfully) is now a real catalyst: the impact of removing ~$20M/day of miner selling is impossible to ignore.” the trading firm said. “It will take significant macro headwinds to offset the impact of that flow’s sudden disappearance,” Cumberland officials wrote.