The cryptocurrency market appears by some measures to be poised to break out of the narrowest trading range in almost two years.

Based on one gauge, the leverage ratios for the two largest tokens by market value — Bitcoin and Ether — are at the highest on record even with prices of both down more than 50% this year. That is calculated by taking the amount of open interest for perpetual swap contracts and dividing that by the amount of coins held in reserve on exchanges, according to blockchain data-site CryptoQuant.

“Folks think the market has stabilized and are willing to make bigger speculative positions,” said Darius Sit, co-founder of Singapore-based crypto investment fund QCP Capital, who pointed out that traders who see a so-called tail risk — or the chance of a loss happening due to a rare event — are “getting priced out.”

Also Read: Crypto.com accidentally refunds over $7 mn instead of $68 to customer

Crypto traders tend to favor perpetual contracts — which, unlike traditional calendar futures, don’t expire — in part, because it allows them to keep highly leveraged positions in place.

Bitcoin, which accounts for about 40% of the estimated market value of all cryptocurrencies, traded last week within a range of about 5.4%, the narrowest since October 2020, data compiled by Bloomberg show. The lull two years ago was followed by a months-long surge in prices that eventually pushed Bitcoin to a then-record high in April 2021.

Cryptocurrencies have stagnated since June, when prices tumbled in the aftermath of the collapse of the Terra stablecoin ecosystem, the demise of hedge fund Three Arrows Capital and the bankruptcies of Voyager Digital and Celsius Network.

Despite recent hawkish comments from the Federal Reserve about inflation and the economic slowdown continuing to weigh on riskier assets including crypto, more traders appear to be putting on bullish leveraged bets. 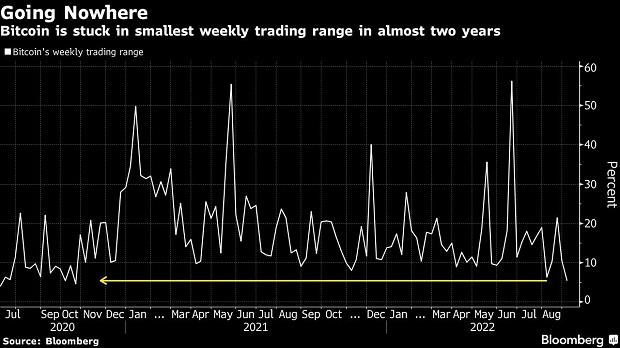 Overall, the biggest catalyst of the growing leverage is likely the highly anticipated upgrade on the Ethereum blockchain later this month. The most commercially important network is set to move from its current system of using miners to a more energy-efficient one using staked coins. Data collected by blockchain research firm Kaiko show that perpetual swap contracts’ open interest denominated in Ether reached an all-time high at the end of August.

“As we get closer to the Merge, ETH leverage will continue to build up,” said Shiliang Tang, chief investment officer at crypto asset investment firm LedgerPrime.

At the same time, funding rates for both Bitcoin and Ether perpetuals have turned negative in the past few weeks, according to data-site Skew. Exchanges use the so-called funding rate — or the cost to trade — to tether the contracts to their underlying spot price. When the rate is positive, those who hold long positions are paying interest to investors who are short, and vice visa.

Kaiko estimated that traders are biased to the downside because they’re either betting on an unsuccessful or delayed transition of Ethereum to proof of stake or are hedging long spot Ether positions ahead of the Merge.

“The growth of leverage with more bears could result in a short squeeze, as over-leveraged bears get liquidated if prices move up,” said Andrew Tu, head of growth for crypto algorithmic-trading firm Efficient Frontier, which takes neutral positions in trading.