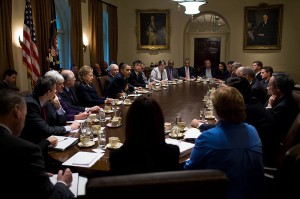 With the number Americans applying for unemployment benefits at an all time low, things are looking up for those looking for a job. Just last week, the number of applicants fell by 27,000 indicating that hiring is steadily improving. These trends are not volatile, evidenced by Jim O’Sullivan, an economist at High Frequency Economics. In November 2012 – January 2013, employers added 200,000 new jobs, which is up 150,000 jobs in the previous three months.

Can these trends last? In Obama’s state-of-the-union address on Monday, the president promised higher federal minimum wage across all states—from $7.25 to $9.00. The change will take place over two years with minimum wage steadily increasing to prevent inflation. Obama sets out to reward minimum wage workers and to keep families above the poverty line. The hope in raising minimum wage is to create a ripple effect, increasing wages all across the board and therefore increasing spending.

These two seemingly contradictory events will create an interesting dichotomy in tomorrow’s job market. Will employers be willing to hire at the entry level if they have to pay their current worker a higher wage? Or will the boost in wages create a trickle down effect, increasing spending and opening up more employment possibilities?