The GBP/USD is under pressure as the US Dollar gains strength across the board and worries about Brexit consume the Conservative Party. Where next for the Pound? Recovering may be hard, and falling is more natural.

The Technical Confluences Indicator shows that Sterling has noteworthy support only at 1.2984 where we see the confluence of the Fibonacci 61.8% one-month and the Simple Moving Average 50 one-day.

Lower, a feeble cushion awaits at 1.2950 which is the confluence of two Pivot Points: the one-day Support 2 and the one-week Support 1.

Significant support is only at 1.2870 which is where the Bollinger Band one-day Lower and the Pivot Point one-week Support 2 converge.

The path higher is filled with substantial caps peaking at 1.3106 which is the congestion of the SMA 5 one-day, the SMA 100-4h, the PP one-day R1, and the all-important Fibonacci 38.2% one-month.

All in all, the path of least resistance is down.

This is how it looks on the tool: 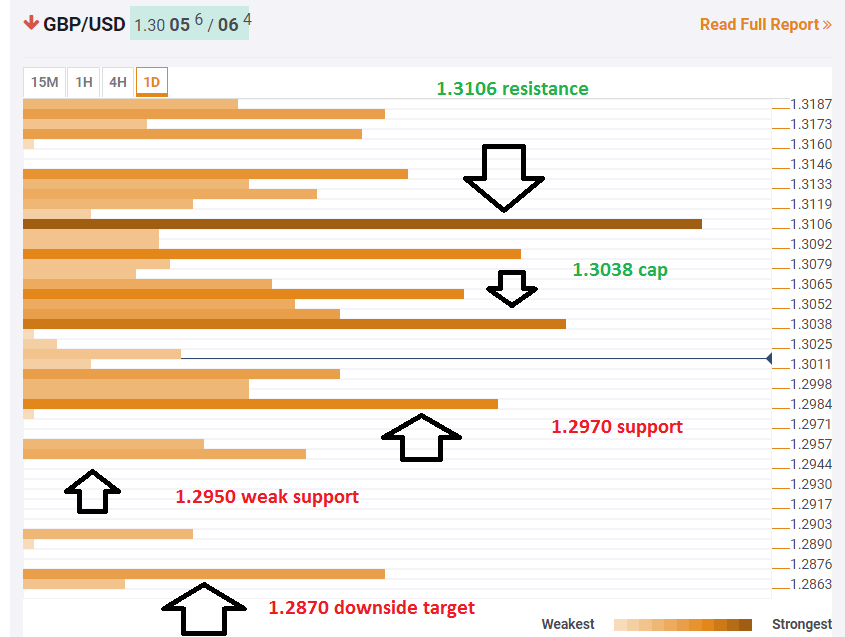 The Confluence Detector finds exciting opportunities using Technical Confluences. The TC is a tool to locate and point out those price levels where there is a congestion of indicators, moving averages, Fibonacci levels, Pivot Points, etc. Knowing where these congestion points are located is very useful for the trader, and can be used as a basis for different strategies.

This tool assigns a certain amount of “weight” to each indicator, and this “weight” can influence adjacents price levels. This means that one price level without any indicator or moving average but under the influence of two “strongly weighted” levels accumulate more resistance than their neighbors. In these cases, the tool signals resistance in apparently empty areas.