On Monday the 1st of October, trading on the euro closed down. The rate rose to 1.1625 during the European session before dropping to 1.1564 in the US. I found the market’s behaviour confusing yesterday given that the euro dropped against the dollar on the back of positive news concerning Brexit, a rise in oil prices, and a drop in US10Y bond yields.

Brent oil rose to 85.30 USD per barrel, which provided support to commodity currencies. The USDCAD currency pair dropped to 1.2782. The loonie rose as the euro took a dive. Moreover, this all happened against the backdrop of a decline in US10Y bond yields.

Aside from oil, the loonie was also propped up by Canada agreeing to a new three-way free trade deal called the USMCA (US-Mexico-Canada Agreement).

September’s ISM manufacturing PMI disappointed markets. The report came out lower than the previous value, and lower than the forecasted value. The release of this PMI data stopped the US dollar’s rise in its tracks, but now it’s back on the attack. 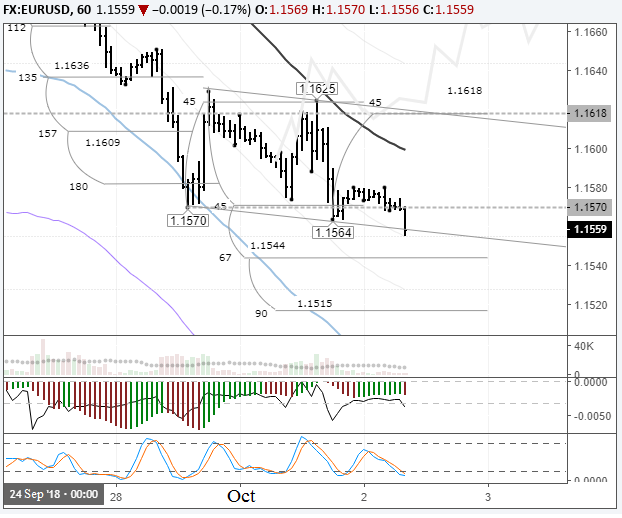 The pair has exited the channel. I’m not considering a decline today given that the hourly cycles and patterns show the euro strengthening. Add to this my confusion over the euro’s decline yesterday and I can say that for me, the market situation is ambiguous.