The benchmark 10-year Treasury yield edged up to 3.08% on Tuesday (May 15), marking a new seven-year high, based on daily data published by Treasury.gov. The implied inflation forecast via Treasuries continued to advance as well, signaling that the market is pricing in firmer pricing pressure in the months ahead.

Notably, the yield spread between the nominal 5-year Treasury less its inflation-indexed counterpart ticked up to 2.15%, the highest since 2013. The rise suggests that the crowd anticipates that the official inflation indexes will continue to trend higher – a development that would likely reaffirm and perhaps accelerate the Fed’s current program of tightening monetary policy. 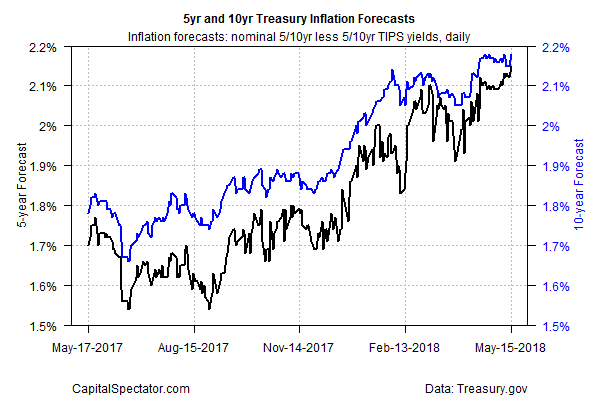 The April report on consumer price index (CPI) confirms that pricing momentum is heating up, albeit following a period of subdued inflation. In a sign of the times the CPI’s headline and core readings simultaneously posted year-over-year increases above 2% — the Fed’s inflation target – for a second month. That’s the first time that headline and core indexes have been that high in more than a year. 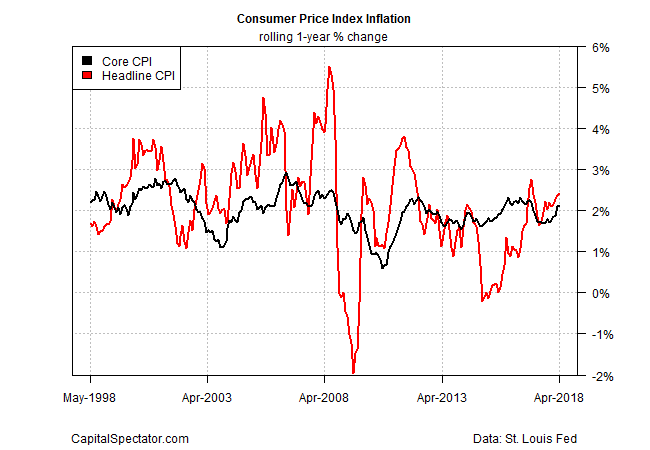 For the moment, a mildly hotter level of inflation isn’t worrisome, in part because the upswing coincides with expectations for stronger economic growth. Several estimates of US GDP growth for the second quarter are projecting a rebound after a subdued gain in Q1. Yesterday’s April data on retail spending offers support for thinking positively as consumer spending increased for a second month in a row – the first back-to-back set of gains since last November.

An sharp acceleration in inflation from current levels, or a downshift in economic growth, would be problematic for assuming that a Goldilocks scenario will prevail – a healthy expansion with relatively tame inflation. To date, however, those risks are considered low-grade threats.

“This is continuing to be a quintessential Goldilocks kind of economy and Goldilocks expansion: The economy’s growing at a solid pace,” advises Nathan Sheets, chief economist at PGIM Fixed Income. “This is the kind of economy central banks dream of, not too hot, and not too cold.”