EU-US talks aimed at clinching a comprehensive free trade deal have run up against “huge scepticism” in Europe, the European Commission says.

The Commission has published the results of a public consultation on investor protection – one of the most contentious areas under discussion.

There were many objections to the idea of using independent tribunals with power to overrule national policies.

A lot of work is needed on future investment rules, the Commission says.

The talks on a Transatlantic Trade and Investment Partnership Agreement (TTIP) are continuing, but the important area of investor protection has been suspended for now.

There are widespread fears in Europe that EU standards might be weakened in some areas, in a trade-off to satisfy powerful business lobbies and revive Europe’s struggling economies.

But the Commission acknowledges public concern about court cases in which powerful companies have sued governments over public policy.

Swedish energy giant Vattenfall brought a claim against the German government over its move to decommission nuclear power plants.

And US tobacco giant Philip Morris sued the Australian government over the introduction of plain packaging for cigarettes.

In the UK concern has focused on the National Health Service and the possible involvement of US firms in healthcare services.

Of the total responses in the consultation 35% came from the UK – the largest share – and Austria was second. 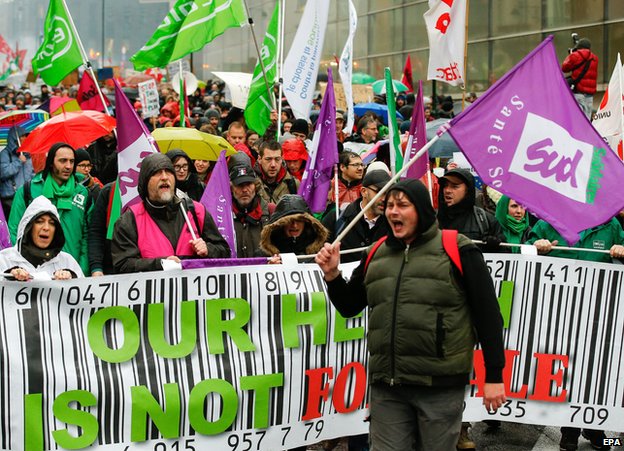 EU governments have agreed to include investor-to-state dispute settlement (ISDS) in the final TTIP deal.

But ISDS, involving independent arbitration in commercial disputes, has not yet been agreed by the European Parliament, which will have to approve any final text. And now the Commission says a decision on ISDS will have to wait until the final phase of the TTIP talks.

Some public services, including government procurement rules, can be excluded from such deals.

Commission President Jean-Claude Juncker says the plan is to reach a TTIP deal by the end of this year.

“The consultation clearly shows that there is huge scepticism against the ISDS instrument,” EU Trade Commissioner Cecilia Malmstroem said.

“We need to have an open and frank discussion about investment protection and ISDS in TTIP with EU governments, with the European Parliament and civil society before launching any policy recommendations in this area.”

ISDS is already a widely-used mechanism in international trade. But the Commission says it wants the TTIP rules to be exemplary, and not jeopardising EU standards or governments’ right to regulate.

The Commission says it received nearly 150,000 public responses – an “unprecedented” number for an EU consultation. But many were identical responses submitted by pressure groups (NGOs). A UK campaign group, 38 Degrees, submitted 50,000 responses.